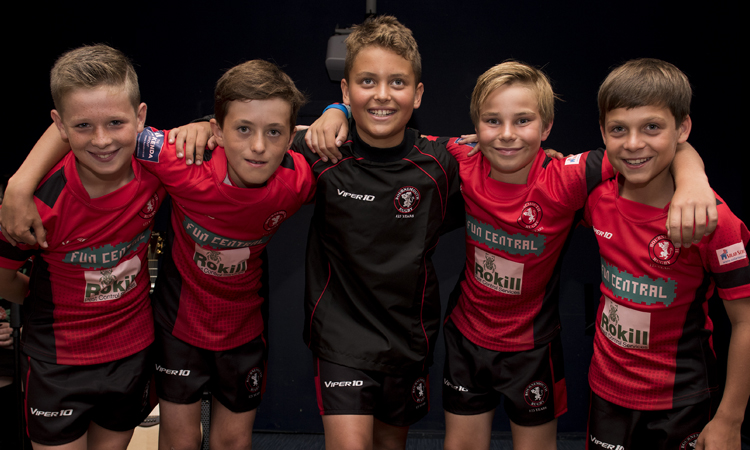 Bournemouth Rugby will enter the upcoming 2017/18 season with more than high expectations and a sense of ambition, the rugby club will possess a vibrant new image. Viper 10 is proud to be Bournemouth Rugby’s official kit supplier, providing the entire club with brand new, bespoke playing kits, alongside a wealth of off-field clothing options.

Earlier this week, Bournemouth Rugby invited their array of fantastic sponsors to witness the unveiling of their new Viper 10 kits, which were superbly modelled by players at the club ranging from the first XV down to under 7s. A great deal of credit must be given to the Bournemouth Rugby team and Wendy King in particular, who alongside the Highcliffe Marriott staff, organised a wonderful event.

Bournemouth Rugby CEO, James Croker, was his usual confident and comedic self whilst orchestrating proceedings. It was apparent almost immediately that the master of ceremonies was addressing a room full of friends and like-minded individuals, rather than a room of cold, financially focused sponsors.

Croker was visibly excited when talking about new partnerships with local organisations Viper 10 Sportswear and AFC Bournemouth, who are both befitting of the new Bournemouth-centric philosophy of Bournemouth Rugby.

When asked about the new partnership with Viper 10 Sportswear, Croker had this to say; “We put the new kit out to tender and ultimately it made sense that Bournemouth Rugby should be using Viper 10 as a locally-based, international provider of sportswear, who we not only know and share values with, but which has such a great product. Viper 10’s help with the design and delivery of the new range and colour change for our First XV right down to our minis and youth section ahead of our significant 125th season has been first class. Everyone agrees, the end result looks and feels great.”

The new Bournemouth Rugby kit colours of red and black came as a surprise to some but the decision was enthusiastically explained by Croker, who touched on the history of the club and how Bournemouth Rugby formerly graced the pitch in a black and red strip 100 years ago. The 125th Anniversary playing kit’s change of colour also supports a community-wide #PaintTheTownRed campaign which is supported by the aforementioned, AFC Bournemouth.

Alongside the introduction of a full time community team, headed up by Rippa Rugby, Bournemouth Rugby has placed a great emphasis on effecting Bournemouth in a positive manner and has seen encouraging progress off the field over the past 12 months.

The impact the rugby club has made in recent times has not gone unnoticed and Viper 10 Managing Director, Stephanie Essex echoed this, stating ‘As a Bournemouth Brand we’re extremely excited to be working with the biggest and most successful rugby club in the area. They are doing great things on and off the pitch and we feel that our partnership is a match made in heaven, we share the same ideals and are proud of where we’re from’.