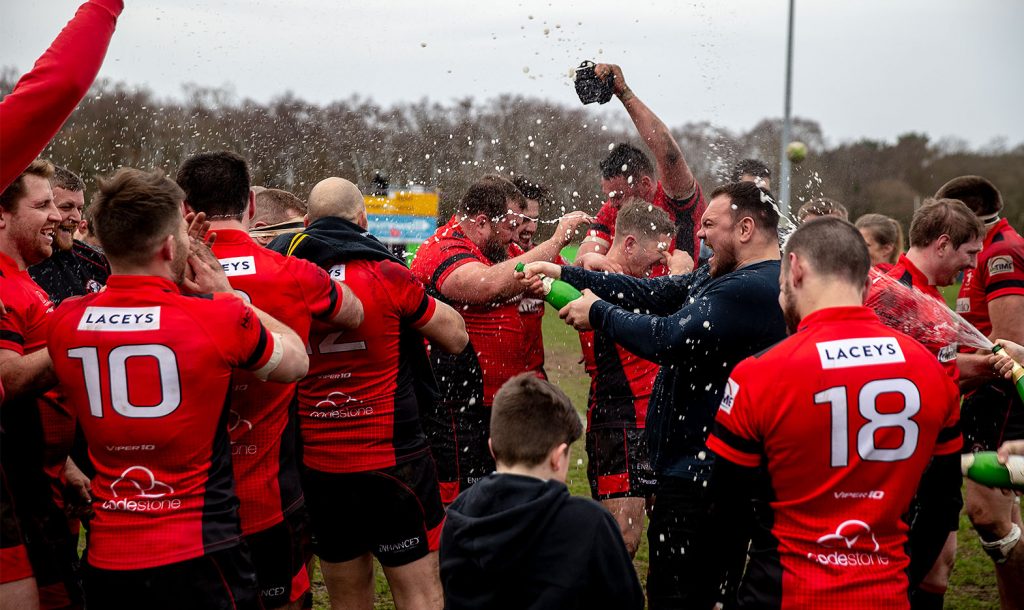 Viper 10 are ecstatic to confirm that our good friends and partners Bournemouth Rugby Club have officially secured their promotion to the fourth tier of English rugby with four games still left to play! It has been an epic season for the Lions and it’s sensational to see all the hard work put in by all involved at the club paying off!

It has been a historic campaign for Bournemouth Rugby Club’s First XV. Dorset’s premier side started the season in emphatic fashion with a 50-0 away from home victory and have not looked back, leading the pack since the opening weekend with an incredible 21 wins from 22 games through the 2018/19 season. Adding to this, the Lions have not lost at home since October 2017 (to then league champions Dings Crusaders), turning Chapel Gate into somewhat of a fortress.

The Lions dominance has been undeniable, with the team recording victories over every side in league on their way to claiming the South West Premier title. Ignoring Bournemouth‘s impressive win-loss record, the side do not lack accolades that will definitely evoke envy amongst their competitors. On their way to amassing 99 league points, the Lions have accrued a ‘points difference’ of over 500 (next best is 150!), which comprises of a ‘points for’ tally of over 800 points (over 150 more than the closest side) and ‘points against’ held to an incredible 305 points (again, 150 better than any other side).

Bournemouth Rugby Club will be retuning to National 2 South after an extended absence from the division in which they last competed in during the 2012/13 season, after once again claiming the South West Premier league title in 2012 (previously know as National League 3 South West).

Expectations will be high for the Lions next season as the quality and depth of the senior squads throughout the club is stronger than ever before. Will Croker and Jon Sanchez, Director of Rugby and Head Coach respectively, have already expressed their intentions to build upon an already solid foundation in order to enable the club to continue excelling at the next level.

The future looks bright for Bournemouth Rugby Club and we are positive that our local club and partners will be able to establish themselves in the upper echelons of English rugby. On a similar note, the Viper 10 team would like to take this opportunity to once again congratulate all the players, coaches, staff members, volunteers and supporters of Bournemouth Rugby Club on what is a truly momentous achievement. We can’t wait to see what the future holds!